Building their own Aquaponics Systems 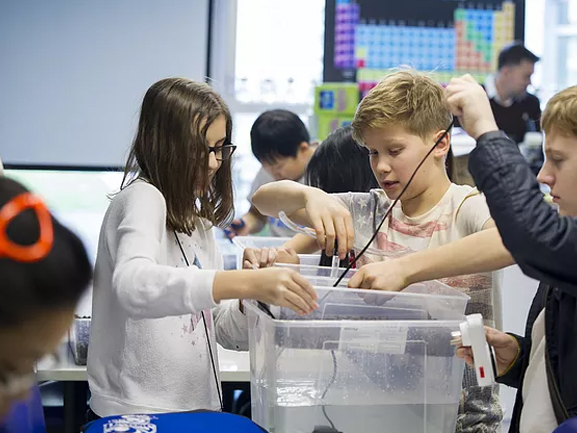 Do you know how to grow your own food? I’m 34 years old, and I still can barely manage to perfect macaroni and cheese!

In our integrated unit entitled “The Phoenix Project,” students would not only learn to grow their own food, but make real decisions about which food growing model would be best for future societies. But the project didn’t start that way…

On Day One of the project, students were taken out as refugees to the middle of an open field and told that their homes and livelihood had been destroyed. We explained that a major earthquake had struck the center of Beijing- destroying roadways, housing structures, transportation routes, and much of the recent infrastructure China has constructed. Our students, once members of stable families with a guaranteed source of income, were now refugees.

As new refugees would in a real disaster, students lined up to receive food rations, medical care, and “role cards” describing their age, occupations and other background information. I acted a ‘fake volunteer’ of the Red Cross. I tried to console them and help them through the situation, just as a real volunteer would do given the situation.

Students were clearly excited: “What’d you get?” A boy asked nudging his friend as they wait in line for a snack.

“Ah that’s better than mine! I’m a single plumber from the Beijing suburbs!”

After the brief hour and a half launch for the unit, upon returning to school, students met as a society to brainstorm their immediate wants and needs given the present situation. As facilitators, we helped guide them into asking the right questions.

“Let’s make sure the safety patrol earns the most money!” Shouts an excited young boy, as he shows the class his ‘member of police’ role card.

A facilitator re-directs the conversation with a key inquiry:

“You say we should rebuild the economy, but  is that a ‘want’ or ‘need?’ The facilitators probe.

In this particular case, as facilitators of learning, our job was simply to foster curiosity in our students and help guide them to the central unit question. Rather than encourage compliance in a pre- determined teacher- directed lesson, we welcomed disagreements and conflict as it was more authentic to the needs of the project.

Students learned naturally that without a clear hierarchy, they would have trouble narrowing down their list of wants and needs. Therefore, they decided on their own that it was crucial to come up with some kind of governing body to make decisions as they moved forward. They also knew that as a society of 10,000 refugees, one of their primary concerns would be to generate a stable food supply. This led them into questioning the kinds of food they could grow in Beijing.

By the end of the first day’s simulation, with the guidance of the facilitators, students had come up with the driving question for the unit:

“As a new society, how do we feed our population?”

The question was open, highly engaging and authentic- three central precursors for effective project- based learning.

In this highly engaging project, students would have to learn about various food production models; write argumentative proposals for the one they felt worked best for their society; create a self- governing body to manage it, use mathematical models to project their effects on society, and finally construct the models and reflect on their overall effectiveness.