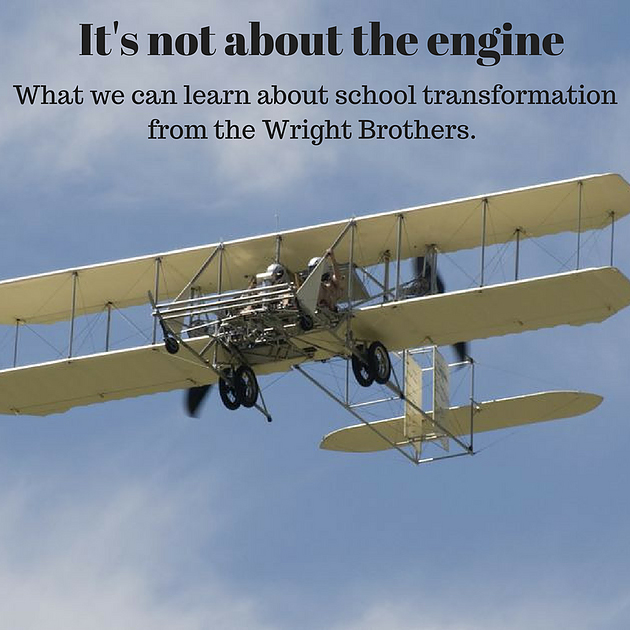 The Wright Brothers were the greatest innovators the world has ever known. Period. I know that’s a bold claim, but let me explain why…

Back in 1903 the race was on all around the world to invent the first plane that could fly. In the engineering of the plane, people became utterly obsessed with “the engine”.

Inventors started building larger and larger engines with more and more horsepower and strapping them to planes.  People came from all over the world to observe these engines, and marvel in their complexity.

But there was a problem. This craze with the engine resulted in some of the fanciest and most powerful engines the world had ever seen; but it also resulted in planes that could barely get off the ground and were utterly useless.

The Wright Brothers took a different approach, while the whole world obsessed with engines the Wright Brothers obsessed with the plane and its aerodynamics.  They first focussed on a plane that could glide WITHOUT an engine, and then, when they had the recipe right, they strapped an ordinary engine to it and voila! The world’s first flying plane was invented

This innovation had nothing to do with the complexity of the engine or the inner-workings of thousands of moving parts; but all to do with the simplicity of their overall design.

It took looking at the challenge from a different angle.

Today, when it comes to school innovation and transformation we are repeating history of the engine obsession.

We have become enamored and obsessed with the hottest buzz words in education- “maker spaces,” “edtech,” “flipped classroom,” “differentiation,” and completely ignoring the conditions necessary to make these innovations most effective.While we obsess and frenzy over new technology, or the latest digital tool, or new standards,  in reality, what we are doing is strapping a larger and more powerful engine to a fundamentally flawed plane.

The “Wright Brothers” in today’s world of education are the school leaders who get it.

I call these leaders the ‘rain- makers.’

These are the school leaders that focus on the right conditions to retain teachers, improve student learning, and innovate.

They know that it’s less about the flashy innovations that you add to your school, and more about the conditions you create to allow those innovations to thrive.

The ‘grinders’ in the world of education are still struggling.

They are enamored with innovation but ignore the underlying structures in their schools that will cause that innovation to fail time and time again.

So what are the two simple strategies that the rainmakers employ time and time again to get the greatest results?

2. Introduce an innovative learning system that yields the greatest results

I want to share with you exactly how you can create these conditions at your school. Follow the link below.