Connect your School to the Community 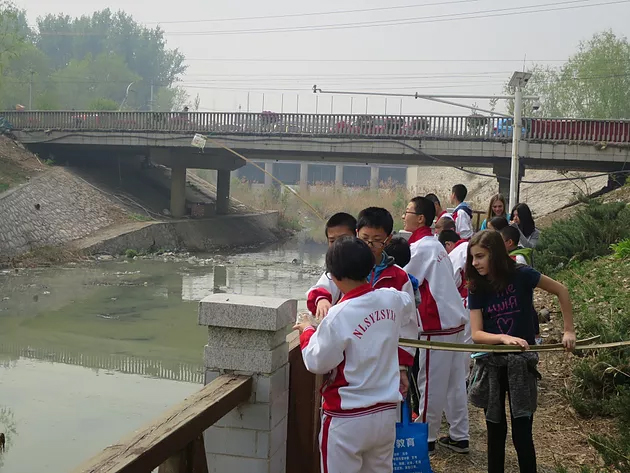 I pass the same river every day. It doesn’t look much like a river. With trash that smothers its surface, it looks more like a massive dumping ground for those too lazy to find the nearest trash can. It used to be the most majestic waterway of ancient times. Now, it’s an eyesore.

About a year ago, I purchased a 10 speed bike and committed to biking to school at least one day every week. The river served as a roadmap, winding and meandering to guide me all the way from the city of Beijing to the Shunyi suburbs where I worked. It was on these rides that I swore one day I would try to help return this river to its once majestic state.

But I needed help.

This story isn’t about me and my goal to make a positive impact on my local waterways. I barely speak enough Chinese to turn heads. No, this story is about 40 Futures Academy Students. Our young innovators and problem-solvers. It’s also about 40 students from a local partner school, committed to generating change. And finally it’s about the importance of relationships in helping address a community problem.

Welcome to ‘Project We Are One.’

If international school leaders hope to connect with their local community, they first need to find someone with long standing Guanxi. Guanxi in China is as sacred as the right to free speech in the States. It’s the basis of all relationships. Without it, it doesn’t matter how grand the vision or deep your pocket, you simply aren’t going to get much done.

When Futures Academy Facilitators sought to lead students to improving our local waterways, we knew we needed to first reach out to our government affairs office. These employees had a long standing relationship with the local government, and could receive permission to test local waterways in the amount of time it takes to pick up a phone and dial the number.

We also knew that we had to address the problem of local water pollution as a community. Pointing fingers would get us nowhere, and if anything, cause distrust from the local government, fearing we might expose their deficiency in addressing the problem.

Getting others on board

A large international school like ISB has created a name for itself in Beijing, but it’s still comprised primarily of guests to the country. Most parents are ex-pats who manage local production; there for a two to three- year contract before moving back to their home countries. Given this reality, creating a sustainable change to our local waterways would have to be established by the local people.

Futures Academy established a relationship with a local school a year ago in order to foster this long lasting change.

The #1 NiuLanShan MIddle School of Shunyi is well known for its innovation and was eager to team up with the innovative wing of our school to do something great. Last year, we began the partnership as home stays, partnering each of our students with a student from their school to stay as guests in their homes. This established the basis for cross- cultural understanding.

This year, we wanted to elevate the level of partnership to do something truly impactful. We reached out to their school leaders and met over a two- hour lunch meeting. We didn’t expect much. We had a bold vision and knew that it could only be obtained by taking baby steps. But after our two- hour discussion, we had taken a giant leap.

Not only had we secured the partnership to work together to clean up our local waterways; more importantly, we established the series of experiential learning opportunities our students would take part in, as well as a vision for how students would exhibit their work to the get the greater community on board.

As leaders, we understood the importance of getting this right. Without a clear vision for what students would produce and how they would exhibit their work, the collaboration would involve nothing more than a few field trips and picnic lunches. Therefore, one of the first things we had to establish with all 80 students was a vision for the work they would exhibit.

Given our limited seven- week time frame for the project, we had to be realistic. We told students not to expect a new trash collection system in the city or a promise from local farmers to plant pollution filtering plants on the riverbanks. Instead, we guided students through imagining one single action step they could take to lead to a positive change. The problem was complex, but great change could only happen through simple small steps.

In short, we accomplished our goal. Students were energized by the idea that they could make a positive change by decreasing their own ecological footprint.

After a series of trips to the local waterways to collect data and better understand the problem, students worked on their action steps.

Facilitators helped guide students through protocols on their action plans which included fully documenting the problem, providing a rationale for their proposed action, and finally, detailing how they would evaluate whether or not their action made an impact. They received detailed feedback for their action plans on three occasions to ensure it improved in clarity before exhibition.

Students exhibited their work at the local NiuLan Shan School. As mentioned previously, if change was going to happen, it needed to be inspired on a local level. Futures Academy students took turns presenting with their Chinese partners. The local media documented the entire exhibition; from speeches from key leaders to the cutting of the ceremonial “community cake.”

One student created a lead free lipstick that she sampled on the audience. This lipstick, she hoped would decrease lead levels in the local river.

Another student created a rain collection device. This giant water reservoir involved water entering the top, flowing through a series of beads, and then down into the collection basin. This he hoped would ensure clean water for dry months in Beijing.

Another student used bottle caps to create small holders for micro-bead free soaps created by another student.  This, she hoped would decrease the amount of micro-beads in the rivers and ensure greater aquatic life.

We hope to step up the level of collaboration next year. This year students took a small action to improve their waterways, next year, they will incorporate what they learned to take a greater action as part of a semester long ‘Capstone Project.’ Project ‘We are One’ served its purpose!