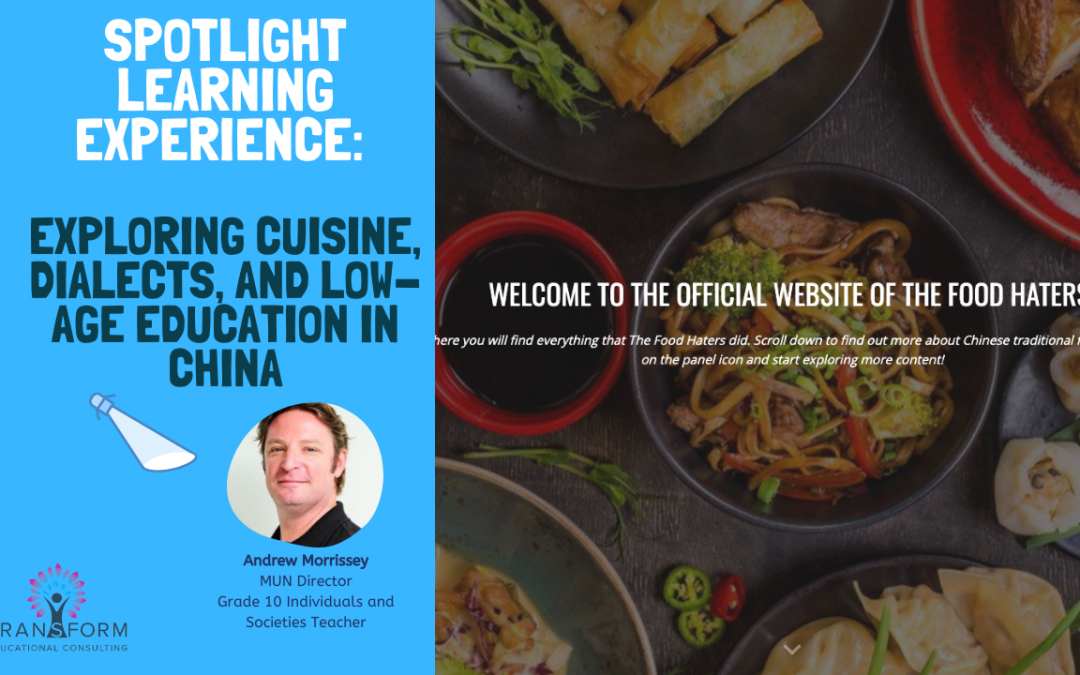 Andrew Morrissey, a grade 10 Individuals and Societies IB teacher at Beijing City International School was finding his “Causes of World War One” unit falling on deaf ears. His teenage students, while finding the topic interesting from a History perspective, found no relevance of the unit to their lives. The unit included important lessons, but they were lessons from another culture; explored nuances of language, but in a dialect different from their own. Andrew knew that if he was going to capture their attention, he had to take a different approach to teaching history.

After a short PBL 2- day course with Andrew and his fellow teachers, he found his answer: He archived the unit in favour of “Modern China: It’s place in the world.”

His students were immediately intrigued. The title alone inspired exploration for students who were mostly from China to dive into their own language and culture, while allowing foreigners to learn more about their host country. He even let students design the Driving Questions. His three grade 10 classes generated driving questions around cuisine, dialects, and low-age education.

Being true to ‘Voice and Choice,’ each class decided on 3-4 essential questions and topics around each larger theme. The topics originated from what students were interested in about modern Chinese society.

The cuisine group arrived at the driving question,

“How would we present traditional cuisine in different regions of China, and how they have changed recently, to a High School Audience?”

Students produced authentic pieces of work beyond Andrew’s expectations. Some groups created video blogs of visits to restaurants, while others developed fusion cuisine websites, documentaries, and informational cooking videos. To help them get there, each group created an online Group Action Plan and Process Journal, where they had to showcase their communication and collaboration, research, critical and creative thinking skills, conduct source analysis (OPVL), reflect on each lesson, and at the end, develop a reflection on the whole process. Mr. Morrissey asked students to provide a written reflection in the middle of the deep dive project, and an audio one at the end. Students hit each of the MYP Y5 criteria twice! Here is one of the final websites, by a group called “The Food Haters”: https://sites.google.com/view/thefoodhaters.

This particular group developed such an affinity with each other that they took the same approach to the unit on social conformity, calling themselves the “Conformity Haters!” Using the professional STEEP Analysis tool, the group seamlessly sub-divided tasks and roles to allocate group responsibility and focus their research.

Project Organization and The Transfer of Skills: The ‘conformity haters’ never tried STEEP analysis before, and emerged with what they found to be a very efficient way to conduct research. Building off what Andrew taught them about Source Analysis and how to conduct meaningful reflection earlier in the year, the group was able to practice reflective habits from their cuisine unit, and then transfer them to projects in both Science and English. From their trips to numerous restaurants to order, eat, and film each dish, food was given a new meaning, as students now understood the origins and ingredients.

“It was more than just food- it was a piece of history and culture.” – Andrew Morrissey, Year 10 Individuals and Societies Teacher

New Appreciation for Culture, family ties, and Integration of Skills: Another group decided to create cooking videos, highlighting different kinds of cuisine (Zhejiang, Beijing and Tianjin) based on where they were from. In addition to gaining skills in organization and coordination of work outside of class, they also had to learn to cook, and film for a series of educational videos. They developed a new appreciation for the origins and histories of their hometown cuisines, emerging with cooking skills that they hadn’t developed before. An even more unexpected outcome was that they sat down, some for the very first time, to have meaningful conversations with parents and grandparents- discovering family histories that they had never before known. In each of the student reflections, this was a high point.

Newfound Resilience: Another group decided to go out and interview restauranteurs and chefs at famous establishments around Beijing. This proved to be a huge challenge, as it started with cold-calling and e-mailing dozens of restaurants, being either put on hold or being told to call back later. Several promising leads turned out to be dead ends. But students were resilient, and were eventually awarded a guided tour of a large restaurant and an interview with one of the top chefs in the city. They came away from it all with the realisation that being refused is not the end of the world. They also reflected on their communication style and improved their message to better persuade adults. Their resilience paid off, and they were very proud of what they’d learned and achieved. Here’s the advice they would give others:

“Don’t try to do this with renowned, busy restaurants. You can get the same results, and possibly better-quality interviews, by reaching out to a smaller local one.”

Get in Touch With Andrew To get in touch with Andrew and learn more about his work and other projects at BCIS, reach out to him at andrew.morrissey@bcis.cn.